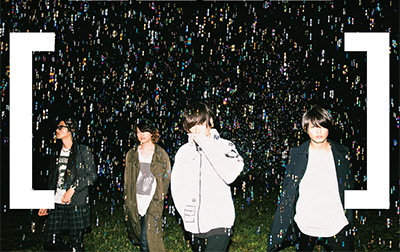 As [Alexandros] prepares to release Exist!, its sixth full-length album, the four members are looking back on the band as the adventure of a lifetime. Founding member Yoohei Kawakami linked up with friend Hiroyuki Isobe in 2007 to form what would become [Alexandros] even though neither of them had any previous experience in bands. Kawakami and Isobe eventually recruited talented high school friends Masaki Shirai and Satoyasu Shomura (guitar and drums, respectively) to complete the band's lineup, working all manner of odd jobs to support the uphill battle of forming a project. Now having lived together and united over an odd, unwavering love of all things meat-related, the members of [Alexandros] couldn't be more thrilled to present Exist! as the logical conclusion of their wild ride.

Listeners quickly flocked to [Alexandros], which to this day remains a stark contrast to Japan’s thriving rock scene. The band is renowned for its dual use of English and Japanese lyrics, often within the same song; Kawakami and Isobe became fluent in both languages during their years living abroad. Combined with dazzling fashion sense, the band's linguistic strokes earned them the attention of major local summer festivals and placed them on opening slots for Muse, Kasabian, and Primal Scream. Thanks to the help of the band's first label, RX-Records, [Alexandros] released four records domestically to ever-growing acclaim; they even played at the legendary Tokyo venue Budokan before a major-label bidding war began over their fifth album.

ALXD, the group's fifth album, would go on to be its first for Universal, seeing the band headline Budokan again. Its sixth album Exist!, out now, doesn't boast the typical influences of a rock record: all band members cite each other, rather than legendary musical figures, as playing a crucial role in their creative decisions. Isobe in particular is grateful for his bandmates, speaking especially highly of his [Alexandros] co-founder: "Yoohei has always been one of the biggest inspirations of my musical career, and probably will be for life." This can be heard on the album track "Kaiju," through the harmonious synchronization of vocals and intense, driving instrumentals, or on the song "Claw" with its raw and rough sound combined with a mix of English and Japanese lyrics. It's no wonder that one of Japan's most fascinating bands is comprised of creatives inspiring one another: what else could be responsible for an album so motivating and emotive?