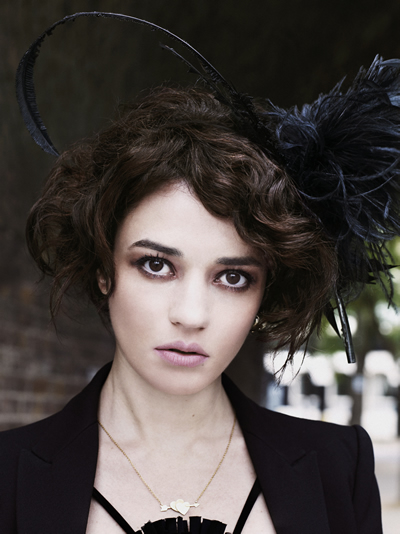 Carmen Consoli was born in Catania, Sicily in 1974. At the age of nine she began playing electric guitar and at fourteen she was alreading performing cover versions in a rock-blues band called Moon Dog's Party. After gaining some experience on Rome's blues circuit she returned to Catania. Here, under the guidance of Francesco Virlinzi – producer and owner of Cyclope Records – she recorded her first album, "Due Parole" (A Couple of Words), a fascinating collection of pop-rock songs with an electric/acoustic feel. The Cd contains "Amore Di Plastica" (Plastic Love), performed during the '96 edition of the Sanremo Festival where Carmen captured the attention of music critics and the public with her unique sound and her ability to compose and perform. A lengthy Italian tour followed plus appearances at major music events (including the 1st May concert at Sonoria in Rome, the Recanati Awards and the Tenco Awards).

In 1997 Carmen returned to Sanremo with "Confusa e Felice" (Confused and Happy), that launched her new album with the same title. It was a complex collection of songs – more electric and "polluted" than the first, confirming the artist's talent with such memorable tracks as "Venere" (Venus), "Blunotte" (Midnight Blue), "La bellezza delle cose" (The Beauty of Things), "Per Niente Stanca" (Not Tired At All) and "Fino all'Ultimo" (Until the End). The ensuing success (over 120,000 copies sold) was endorsed by live tours and concerts where Carmen proved her verve as a dynamic and passionate performer.

The third album, "Mediamente Isterica" (Averagely Hysterical), was released in 1998 and marked another step forwards. The collection, well summarisezd by the debut single "Besame Giuda" (Kiss Me Judas), is a concentration of energy in which cutting lyrics and a powerful sound full of purist melodies exalt Carmen's unparalleled intensity. As well as reconfirming the public's approval for her new songs (including "Geisha", "Puramente Casuale" (Purely Casual), "Autunno Dolciastro" (Bittersweet Autumn), "Eco di Sirene" (The Echo of the Mermaids) and "Contessa Miseria" (Countess Misery), the two tours that took up most of 1999 brought her to a significant stage in her artistic maturity demonstrated in her fourth CD.

"Stato di necessita" (State of Necessity), launched at the Sanremo Festival with the single "In Bianco e Nero" (In Black and White), became a top seller in 2000. During the Spring, this pop-rock '60's style song, both energetic and reminiscent, notched up the most spins in the radio airplay charts, while the summer was dominated by the bossanova rhythm of "Parole di Burro" (Buttery Words). A highly successful summer tour was followed by a scintillating indoor theatre tour where she performed a varied selection of her repertoire – from classics to little gems of unreleased material – some with new acoustic arangements.

In the meantime, "Stato di Necessita" continued to provide single material with its third from the album – "Orfeo" (Orpheus) – followed by the splendid and touching "L'ultimo Bacio" (The Last Kiss) the theme song from the much acknowledged, eponymously titled film, directed by Gabriele Muccino (in which Carmen had a cameo role). The album bounced back into the hit parade and and sold in excess of 200,000 copies. To clinch this jubilant period, Carmen received a number of awards, including two Italian Music Awards, two Premi Italiani della Musica and the 'Nastro d'Argento' from the Taormina Film Festival Awards.

After a number of concerts in France in 2001, "Stato di Necessita" was released there with the addition of two tracks translated into French and the cover version of a Serge Gainsbourg song produced by Henri Salvador. The summer saw Carmen accompanied by the Orchestra of the Vittorio Emanuele Theatre of Messina conducted by Paolo Buonvino in the beautiful setting of Taormina's Greek amphitheatre. This event formed the basis for the CD (also available on DVD) entitled "L'anfiteatro e la bambina impertinente" (The amphitheatre and the impertinent little girl) to be repeated twice more in surroundings that are worlds apart: at Milan's Leoncavallo Social Youth Centre and Rome's Saint Cecilia Academy of Music. These events served to underline Carmen's unparagonable talent and coincided with Giunti publishing her first official biography - Quello che sento - Il mondo, i pensieri, la musica di Carmen Consoli (What I feel – The world, thoughts, and music of Carmen Consoli).

Carmen Consoli's charisma and professional prowess were once more brought to the public's attention in 2002 with the release of a brand new, multi-faceted album "L'Eccezione" (The Exception), which spawned three successful singles: the intense title track, the sprightlier 'Pioggia d'Aprile' (April Showers) and the sparkling 'Fiori d’Arancio' (Wedding Day). Carmen continued touring at length and the European leg was accompanied by the International release of the album with English versions of several songs and other interesting tracks. And the awards kept on coming with the addition of 'Civitanova Poesia' and 'Grinzane Cavour'. Another highlight of the year was the splendid concert she held at Rome's Olympic Stadium – a first for an Italian artist.

In November 2003 'Un Sorso in piu – Live at Mtv Supersonic' hit the stores. It was a live recording of a concert performed for MTV to present the album l'Eccezione – the performance was made up of an acoustic session and an electric session, where Carmen played a custom made pink Fender Jaguar (made to her own specifications) and also presented a band called 'La Camera Migliore', a new signing on her own Due Parole label.

Amongst the many 'firsts' collected by Carmen is being the very Italian artist to take part in the 'South By South West Festival' at Austin, Texas in March 2004. Two months later she was one of the many artists invited by Quincy Jones to take part in his "We Are The Future" project (in aid of children suffering in war-stricken zones). The event was held in Rome and televised globally through MTV. She rounded the year off with a short but very successful club tour playing blues-rock/rock-blues covers under a title most reminiscent of her origins, the name of her first ever band: Moon Dog's Party.

On 6th February 2005 again she was the only Italian artist to go to Ethiopia and perform at the celebrations in memory of Bob Marley, organized by Rita Marley. There Carmen sang a duet with Angelique Kidjo and the two struck up a friendship. Kidjo also collaborated on one of the tracks that were to go on Carmen's next album. In April Carmen returned to the US to do some concerts (Miami, Chicago, New York) which furthered her appeal with those audiences. In 2005 she collaborated with Goran Bregovic co-penning the title track to the Roberto Faenza film "I Giorni dell'Abbandono", and began work on a new studio album.

On 12th May 2006 'Eva Contro Eva' was released – it was hailed by many as a 10 track masterpiece. The lyrics were full of tradition and history, telling many stories of women poised between ancient and modern, old and new, Sicily and the world. Each song is a tale that hails back to Verga, one of Sicily's major authors, and to neorealism in a provincial southern town full of contradictions and conflict, but nonetheless able to express grand and impulsive emotions. The album, which contained collaborations with Angelique Kidjo "Madre Terra" and Goran Bregovic "Il Pendio dell'Abbandono", was released in Italy, Spain, Germany, France, Holland, Switzerland and the US.

Immediately after the album release came a tour of Italy and Europe which had a common theme: 'the river'. Rivers have always played a major, fundamental role in human civilization and they were a source and symbol for Carmen on this tour. From the River Simeto, in Sicily, home to Carmen and cradle of the traditional sounds used on several album tracks, to the River Thames in London, the most densely populated, multi-racial, European capital. At the end of September she was back in North America, on an extended tour of the US and Canada: Chicago, Toronto, Philadelphia, Northampton, Madison and three concerts in New York (all sold-out).

Winter 2006/2007 Carmen staged a concert which made an emotional impact – she called it 'In Teatro' (In the Theatre) in collaboration with Emma Dante, with music and characters inspired by Sicilian life. Carmen's lyrics in turn were adapted by the author and theatrical director Emma Dante to be recited by the Sicilian actress Simona Malato who gave an excellent interpretation. The instruments used draw from both Sicilian and Mediterranean culture. 'In Teatro' was also staged by Carmen and her band in Paris on 14th June 2007.

In September 2007 Carmen returned to New York for the fourth time, where she had a head-line slot at 'Joe's Pub in the Park', the Summer Festival held in Central Park, followed by Canada where she visited Toronto and Montreal. At the beginning of 2008 she did a theatre tour which included the Grosvenor Auditorium, Washington, the Remis Auditorium at the Museum of Fine Arts in Boston and the Mainstage Theatre in New York, where the 'New York Times' critic John Pareles wrote a wonderful review : "Ms. Consoli is a remarkable combination of rocker and intellectual.. she sings..with passion and immediacy, in a voice that holds sorrow, compassion and strength."

In 2008 Carmen wrote her first original soundtrack, the music to the film "L'Uomo Che Ama" (The Man Who Loves) directed by Maria Sole Tognazzi, starring Monica Bellucci and Pier Francesco Favinio, premiered at the Rome Film Festival. This experience stretched her talents to encompass working on an orchestral score for the very first time, including instrumentals. Interestingly enough Carmen gave the main role in the soundtrack to the viola, which is a contralto instrument just like her voice.

10 years exactly to the day, Carmen's rockiest album 'Mediamente Isterica' was re-released. She calls it the 'album of her life' and to mark the 'anniversary' it was re-released in a special deluxe version including rarities and outtakes from the original recordings and live performances at the time.

On 30th October 2009 after an absence of 3 years comes Carmen's new studio album "Elettra" (Electra) which, as the title implies, is centred on women - all angles and aspects of the female universe. Elettra/Electra is a powerfully symbolic figure from Greek mythology (the one who avenged her father by conniving with her brother Orestes to kill their mother and their mother's lover) with all the psychology that lies behind it. It's an album about Love,.. and its complexes, love for one's father, passionate love, incestuous love, love for sale etc etc. But it is also a way of denouncing the political strife that rules Italy – getting more and more like a Greek tragedy every day, says Carmen! One of the tracks was co-written with Franco Battiato, but the first single is "Non Molto Lontano da Qui" and the video is set in a 1920s/1930s brothel, where a customer partakes of the pleasures on offer, but comes to a bitter end when his own lust gets the better of him – a not so veiled comment about the life style of our politicians nowadays. Musically and artistically speaking it has been hailed a jewel of an album, one of Carmen's best, 10 new tracks spanning from traditional Mediterranean sounds to Anglo-American rock influences. She will be touring North America early next year – kicking off from Montreal on January 6th, Boston on January 7th, New York on January 8th. On release she held the # 1 position in the iTunes charts beating Michael Jackson – and held the # 2 position below Jackson in the physical sales charts for the first 2 weeks after release.