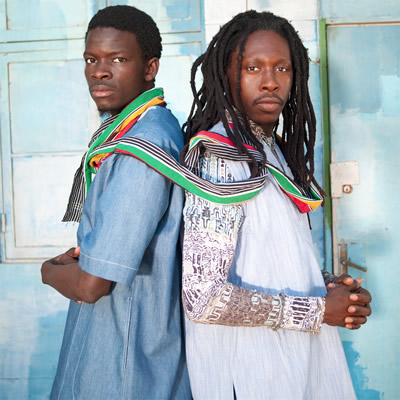 When Africa is your homeland and Dakar your playground, when the soundtrack of your childhood mixes traditional Senegalese music with James Brown or Pink Floyd, when the explosive sounds of Public Enemy radically changes your musical vision and determines which road to take, and when everyday on the way to school you cross the path of someone who, without knowing it, shares the same artistic ideas and dreams of cultural and social emancipation, then it is natural that this chemistry sparks a musical project which maps your adult life.

In 1992, Faada Freddy and N'Dongo D decided to work together. Hip Hop came naturally to them, despite the genre and its representation of everyday life coming from afar, yet the spirit was seemingly encrypted into a collective memory as it was simply a modern continuation of traditional griot rhapsodies from their native countries.

The evidence stands for itself: the music and its hope of communion is what has become their life mission.

So they began by rapping in their wolof dialect, then opened up to all the musical influences that helped them shape who they are today: funk, soul, pop, reggae, traditional music. They created the band Daara J and threw themselves into the task ahead with all the passion and haste of an urgent mission, a quest to conquer a world full of promise.and the world was not able to resist them, they performed more than 1,000 concerts around the planet, opening for Wyclef Jean at the Lincoln Center, for Mos Def at the Hollywood Bowl, playing at WOMAD with Peter Gabriel which took them to Australia, New Zealand, Korea, United Kingdom, Singapore, in France they also opened for Rita Mitsoukos, Zebda, Ayo and performed at the Transmusicales Festival as well at the Solidays Festival.

This gave birth to three albums, the eponymous album "Daara J" in 1997, "Xalima" in 1998 and "Boomerang" in 2003, which won the award for Best African Album at the BBC World Music Awards.

2007 brought a time for re-evaluation, putting things into perspective, a need for renewal.

Downsizing to just the two founding members, the project took the name of Daara J Family, and went back on tour, fortified by a new creative spirit. Following several collaborations (including playing at Damon Albarn's Africa Express Project in London and Lagos), Faada Freddy and N'Dongo D began to work on a new album. This album is at last complete, and after listening to it, you realize the full extent of the knowledge this duo have and their incredible ability to unite New York, Dakar, Paris, and Kingston on a mesmerising musical journey which could only belong to them: pure hip hop, the haunting lament of Bayi Yon (one of the most beautiful melodies on the album), the unbridled funky spirit of "Oh why" and "Celebrate" (a killer dance floor track and the first single to be released from the album), the powerful rant of "School of life", the tribal spirit of "Sun afreeca", the sultry languor of "Tomorrow", the powerful reggae of "Children", the definitive combination of all of these musical influences of "Temps boy" (a song that plays in your head over and over).

And, of course, pulsating through the entire album like blood through a main artery are the rhythmic and hypnotic melodies of Africa, crimson like the boiling blood of hope, the sun-scorched dust of Sahel and the setting sun flaming the landscape of the promised land, a homecoming.

N'Dongo D's raw voice is a perfect complement to Faada Freddy's vocal surges. And once again they prove that they just know how to write beautiful songs.

If you happen to meet the two members of Daara J Family, you will no doubt be struck by the authenticity and consistency of their attitude and of the message they convey. They sing about solidarity, they remain true to their messages, their thoughts and beliefs, the need for sharing and learning from one another. The hope that we will all wake up to this path of righteousness is a recurring theme in their speech.

We could raise a half-hearted smile, but you see, this is not what happens.. faced with so much passionate belief, you surprise yourself by really wanting to believe it, too