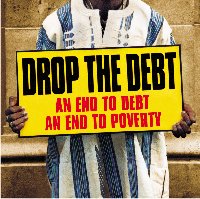 A stunning CD with 16 exclusive tracks recorded by such artists as Cesaria Evora, Sally Nyolo, Lokua Kanza, Chico Cesar and Oliver Mtukudzi.
A remarkable and beautiful record with specially recorded tracks for a special cause.
Jubilee Debt Campaign is continuing the campaigning work of Jubilee 2000 in the UK. Working with partners across the poor world, especially in Africa, their goal is an end to unpayable Third World Debt.
The biggest problem is the misapprehension that the Third World debt has been cancelled. In fact, despite all the promises, less than 20\\% of this debt has been written off, or is scheduled to be cut. There was massive popular support for ending the Third World Debt crisis This CD will aim to reach out to individuals, in a way that normal campaigning cannot do, to tell them that their concerns for Africa haven’t been met. It will also convey the positive message that there is something they can do about it, by heeding the words of the artists from poor countries who have contributed songs to the CD, and by supporting Jubilee Debt Campaign.