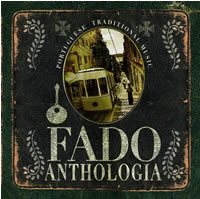 Although Portugal’s musical scene is rich and diverse –when you think of Portuguese music, you immediately think of Fado. Popularized all over the world by Amália Rodrigues, and more recently by extraordinary young singers such as Mariza, Cristina Branco, Mafalda Arnauth, Mísia, Ana Moura, Dulce Pontes or Camané, Fado is the ultimate Portuguese expression.

Fado is just like Lisbon; a melting pot, like the Flamenco in Seville, the rembetika in Athens or Tango in Buenos Aires.

The 70’s and 80’s were a troubled period; the 1974 revolution returned democracy to Portugal but most of Portugal’s traditional values were questioned and sometimes regarded as reactionary. It was not until the 90’s that a new generation of singers and players, of poets and composers, brought back Fado to the streets of Lisbon (there are more Fado houses than ever before, all of them filled with enthusiastic young people, listening to and performing Fado).

Fado Anthologia brings together past and present icons, the men and women who are the voice and the soul of Portugal.