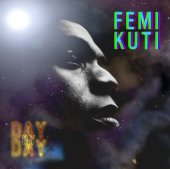 AVAILABLE from the 20th October The world is full of celebrity offspring, yet it is almost impossible to think of one who lives up to expectations to the same degree as Femi Kuti, son of Fela, the originator of Afrobeat and former Public Enemy No1 in Nigeria. He is that rarity, a scion whose career rests on talent and hard work rather than the family name.His latest studio set, Day By Day, has been a long time coming. It is seven years since Fight To Win, four since the live Africa Shrine. “It’s been hard work keeping The Shrine alive,” he explains. “I’ve also been on tour, so it was hard to pin me down in a studio until we got to Paris in the summer of 2007.” He is also father to 7 children!This sabbatical also saw him learning a lot more about being a musician. Femi has learnt to play piano properly and gone back to the trumpet, his first instrument, which he gave up in favour of the sax. The benefits are immediately apparent on Day By Day. “Listen to They Will Run and Better Ask Yourself, they are more jazz than anything I’ve done before. That’s the effect of playing the trumpet coming out.”You can tell that the long lay off has inspired Femi. He is upbeat, enthusiastic and raring to go again. “Everybody is back in training now,” he smiles, “we have to re-establish my music”.