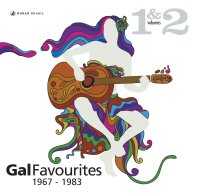 Described as the “Diva from Bahia”, Gal Costa is one of the most illustrious female singers from the tropicália movement in Brazil. She constantly challenged herself as a performer and was actively involved in the political development of Brazil. By the late 70s, she had became a superstar, becoming more and more popular and commercial. Through the 1980’s she was the biggest star in Brazilian music, regarded by many as Brazil’s greatest female singer of all time. Backed up by choice composers, she recorded songs by Jorge Ben Jor (Que Pena) , Erasmos Carlos (Sua Estupidez) and Tom Jobim (Desifinado), and this 29 track double CD encapsulates the Very Best of Gal Costa.