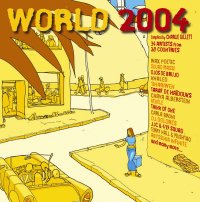 Charlie Gillett's New compilation celebrates 25 years of Charlie presenting world music For the 5th year, Charlie Gillett's World 2004 selection rounds up the best and most popular world music of the past 12 months. (The previous 4 having been released on EMI) As such this compilation is now seen as the must buy World Music Compilation of the year. As Charlie sums it up”This is the Sound of the World today, as heard by these ears.” Charlie Gillett is one of the most influential names on the UK world music scene. His radio shows expose the very best of the genre and he has been responsible for supporting and breaking virtually all of the biggest stars of recent years. The selection crosses all boundaries, nationalities and languages. We open with the hidden gem “Fat Marley”, a favourite of all Charlie’s listeners; from the major acts Ojos De Brujo, Souad Massi, Think of One, Terry Hall, DJ Dolores, Cala Bruni and Tinariwen to the newcomers, Taffetas, Fat Freddy’s Drop, Idrissa Soumaoro and Lo’Joand culminating in the exclusive new Khaled track “Madre” from his new album - this is the best of WORLD 2004.