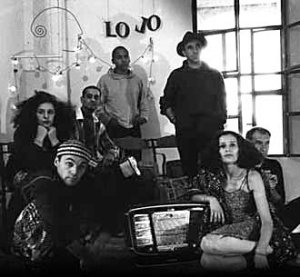 Described in The Independent (UK) as "probably one of the best live bands in the world right now", Lo'Jo finally release their live album to show what all the fuss is about. The group formed two decades ago when singer, songwriter and one-off Gallic visionary Denis Pean met violinist Richard Bourreau in the music school of their native Angers, in the Loire valley. Sweetly strange and bafflingly familiar" describes their magpie mix of influences, which combine French chanson and musette, dub reggae, African, Arabic and gypsy flavours with a jazzy and poetic sensibility. Lo'Jo have never been a band that fit neatly into music industry norms, preferring to concentrate their creative and organisational energies on eccentric and challenging events like The Festival in the Desert, a gathering of Touareg, African and International musicians which takes place annually in the southern Sahara desert. This is music with space, spice and variety