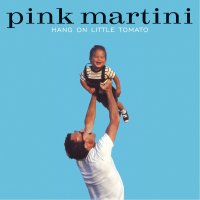 Following on from their world wide success selling over 750 000 albums on their smash debut Sympathique, this is the much - anticipated second album by the “little orchestra from Portland, Oregon. Pink Martini has won international accolades for its melting of jazz, classical, French-cafe standards and Afro-Cuban rhumba. The 10 - member combo regularly tours the European concert and party circuits, and has been heard in such films as the Meg Ryan thriller "In The Cut," and the TV shows "The Sopranos" and "The West Wing." Hang On Little Tomato draws inspiration from such diverse sources as an advertise - ment for Hunts Ketchup from a 1964 issue of LIFE magazine to a dance sequence in the 1950 Italian film Anna, including songs in French, Japanese, Italian, Croation, Spanish and English.