Splendor In The Grass 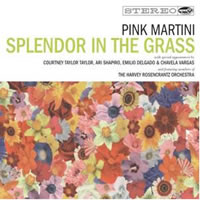 a “wondrously eclectic tapestry of foreign textures, sounds, and cultures.”

Splendor In The Grass, the fourth album from the celebrated and beloved 12-piece little orchestra Pink Martini, will be released October 27 on the band’s own label, Heinz Records. The record is the follow-up to the band’s wildly successful 2007 release Hey Eugene! (which debuted at #30 on the Billboard Top 200, #1 on Amazon and #9 iTunes Top Albums). To support this album, the band continues its national tour this fall and winter.

Splendor In The Grass was recorded in Portland, Oregon at Kung Fu Bakery, by engineer Dave Friedlander (Prince, The Decemberists) and was produced by Pink Martini bandleader/pianist Thomas Lauderdale, Pink Martini lead vocalist China Forbes and longtime collaborator and muse Alex Marashian. Marashian, who directed the band’s only music video, “Sympathique,” in summer of 1999, was editor in chief of Colors Magazine in Paris in the mid-1990s and is currently editor-at-large of Another Magazine.

Splendor in the Grass

“From start to finish, I loved working on this album,” says Lauderdale. “I honestly love it and could listen to it over and over. Each song is filled with references and back stories and adventures,” he continues. “Franz Schubert’s ‘Fantasy for Piano for Four Hands,’ for example, directly inspired two of the songs we wrote: ‘And Then You’re Gone’ sung by China Forbes and its companion piece ‘But Now I’m Back’ sung by Ari Shapiro, who during the day serves as justice correspondent for National Public Radio. ‘Tuca Tuca’—originally sung by the great Italian singer Rafaella Carra—features a sitar solo played by our bassist Phil Baker, performed on the actual sitar played by Peter Sellers in the 1968 film The Party. ‘New Amsterdam’—composed by the blind homeless composer Moondog (who dressed as a Viking and stood on Sixth Avenue in New York City for nearly three decades)—is, in my opinion, the most beautiful song ever written about New York. We found a most amazing choir of young people here in Portland called the Pacific Youth Choir to record the chorus. Meanwhile, the chorus at the end of ‘Sing’ is comprised of the office staff of Pink Martini, the Royal Blues of Grant High School in Portland (my alma mater) and the staff and friends of Portland Mayor Sam Adams. For me, this album is all about participating in the world…being part of it, being out in the street and finding the incredible beauty in the activities and unfoldings of every day.”

Pink Martini was founded in Portland, OR in 1994 by Harvard graduate and classically trained pianist Thomas M. Lauderdale to play political fundraisers for progressive causes such as civil rights, affordable housing and public broadcasting. China Forbes, a classmate of Lauderdale’s at Harvard, joined the ensemble in 1995. In the years since, Pink Martini has gone on to perform its multilingual repertoire on concert stages and with symphony orchestras worldwide including concerts with the Boston Pops, San Francisco Symphony, the Hollywood Bowl Orchestra and the Los Angeles Philharmonic.

Pink Martini’s three previous albums have collectively sold over 2 million copies worldwide, all on the band’s own label, Heinz Records. The first album, Sympathique, was released in 1997 and quickly became an international phenomenon garnering the group nominations for “Song of the Year” and “Best New Artist” in France’s Victoires de la Musique Awards. In 2004, the highly anticipated follow-up, Hang on Little Tomato, was released and climbed to #1 on Amazon’s best sellers list. The band’s third release, Hey Eugene! debuted at #30 on the Billboard Top 200, #1 on Amazon and #9 on iTunes Top Albums.