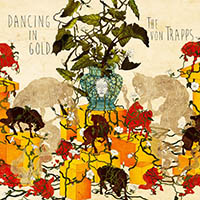 We are delighted to announce Dancing in Gold, the first of three EPs to be released over the next two years by The von Trapps -- siblings Sofia, Melanie, Amanda, and August, great-grandchildren of The Sound of Music’s Maria and Captain von Trapp. Dancing in Gold, released on April 14, 2015, features four punchy folk-pop originals with hints of The Beach Boys, Rufus Wainwright, and Fleet Foxes. Israel Nebeker, singer and songwriter of Blind Pilot and fellow Portlander, helped produce the album and also provides guest vocals. He was charmed by this new generation of von Trapps: “Their sound is an open collage, unafraid of combining disparate style and sentiment. Most importantly to me, it communicates honestly and is sung from the heart.” Absorbing, harmonious, and totally catchy, Dancing in Gold will have you humming its melodies long after the last track. Track Listing: 1) Dancing in Gold 2) Next to Me 3) People like Us 4) Whisper