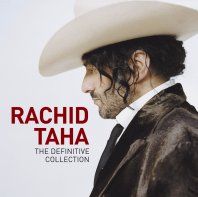 Being proudly North African on the one hand and truly rebellious on the other has meant that Rachid Taha has spent his whole career lobbing musical molotovs at racism whilst berating his fellow North Africans for lack of ambition, obsession with tradition, and enslavement to rai.

After leaving Carte de Sejour at the end of the 1980s, Taha teamed up with the British producer Steve Hillage to record a series of classic albums and now for the first time, Rachid Taha’s Best is brought together on one album. Above all Rachid Taha is a great showman, and this guy knows how to deliver a groove, delivering rude-boy witticisms and hilarious insights with sweaty passion whilst his band fire off raucous rock riffs and snaky Arabic melodies. It's a clear case of never mind the world music bollocks, here’s Rachid Taha. The Best Of is released initially in a strictly Limited Edition of 2000 units with additional DVD recording his return to Algeria.