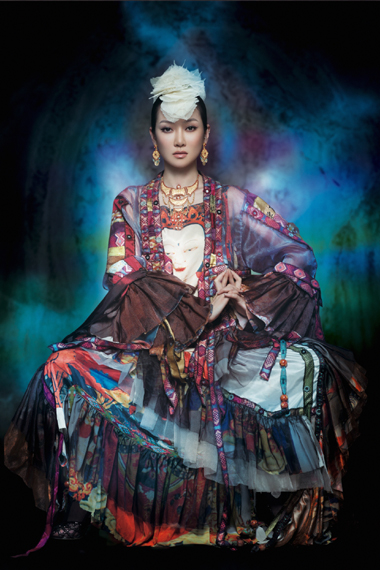 Sa Dingding is a truly unique artist. Born in Inner mongolia, she taught herself Sanskrit (a historical Indo-Aryan language and liturgical language of Hinduism and Buddhism) and Tibetan. Her multi-lingual talents have opened her music up to many different cultures within the Far East, as well as introducing these little known cultures into the rest of the world.
She became known as "China's Best Dance Music Singer" for her first release "Dong Ba La" under the name "Zhou Peng".
Her music made a film appearance in 2006. The film "Prince of the Himalayas" featured her song "Holy Incense"
Sa Dingding won the 2008 BBC Radio 3 World Music Award for the Asia-Pacific region.

Sa Dingding's Music represents a modern China, beautifully combining rhythms of different Asian regions including Tibet and Mongolia with Western electronica and influences of classical and soul. The result is a richly layered tapestry of the ethereal, escapist, eclectic music that is unlike anything else around in Popular culture.

"Sa Dingding is a superstar. Alive has something for everyone. Throughout, moments of beauty cohere and dissipate" Financial Times