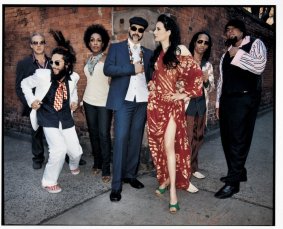 Proclaimed "the master chef of Urban fusion" by the LA Times, Andres Levin has established himself as one of the world's top multi-cultural young film composers and music producers. Born in Venezuela, Andres went on to study music and composition at both The Berkley School of Music and Julliard. Between his early work with famed producer Nile Rodgers and the start of his own production company in 1991, Levin worked with Diana Ross, Tina Turner, Chaka Khan, David Byrne and many more. Having established himself within R&B, he decided to focus on the music of his heritage and began work with many Latin artists.

The distinctive sound developed for Red Hot + Riot has since carried Andres to even greater critical acclaim with his own Grammy-nominated band YERBA BUENA, perfectly captures the exploding bilingual nature of New York's streets while blending the rhythmic sounds of Cuban, African and even Gypsy music into an intoxicating live music cocktail.

Songs by Andres have also been heard in recent years in popular TV shows such as "ER", "Entourage", "CSI Miami" and "Third Watch".