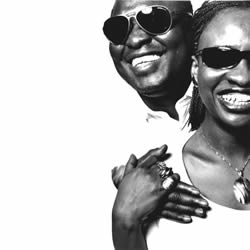 No news at the moment.

Once upon a time there was a magical couple whose destinies were as intertwined as their actions and where their union rendered the impossible possible. His name is Amadou and hers, Mariam.

The time comes for both of them to go to school in their respective worlds. She is singing in family ceremonies but is having problems with her eyesight and becomes almost totally blind by the age of six. He is fascinated by the Tam-Tams and percussion instruments but is struck by a congenital cataract, sharing the same fate.

Adolescence arrives and she is already famous in he neighbourhood, crowds flocking to see her perform at weddings. He arrives in Bamako for an attempt to operate on his eyes, an attempt that would not succeed.

She, guided by her father, follows the road to a special school founded by a blind professor. Here she continues to explore her musical world through song and dance. He, fascinated by the guitar, launches himself into the same world, one that can be such a palliative to those that cannot see. He becomes a maestro of his chosen instrument, participating in a number of groups including the famous "Ambassadeurs du Motel".

A few years after the creation of the Institute of the Young Blind of Bamako, he is called upon to be its musical director. And it is it here, on warm and beautiful day, that Amadou hears the voice of Mariam for the first time.

On that day, he and she become one, fusing themselves to form a single entity: a magical couple. Against all the advice of their peers, who thought that such a union would be impossible, they took each other by the hand and have created and shared a remarkable life together for more than 30 years now.

Both passionate about music, Amadou and Mariam then explore life together both on and off the stage. They marry the same year that they perform together for the first time as a duo and go on to have three children. They perform a tour of Burkina Faso and move to the Ivory Coast where they record five cassettes that will later serve to inspire their albums.

Having conquered the hearts of the majority of West Africa the emblematic couple fly to Europe to further the spread of their good word and well wishes.

They therefore arrive in Paris and, supported by a few guardian angels, begin their international career. Their success is immediate upon their arrival. Their love for song and songs of love in its purest form directly touch the hearts of the French public. Their debut performance at the Transmusicales of Rennes is a triumph.

The first album produced outside of Africa was "Sou Ni Tile" ("Day and Night"). This album paved the way for them to bring their talent from one town to another throughout both Europe and the United States.

This opus, created in the middle of the summer in a little studio in the Parisian suburbs, marked the birth of a small family. Made up of the couple themselves, a sound engineer and an artistic director, the members of this small group were all motivated by the same dreams: the meetings of minds and cultures, the fusion of musical genres. They strove together to give the project the wings it deserved and to create the adventure that they would all share.

For three albums, this album served the magic couple by introducing them to a multitude of artists from the four corners of the earth. The little studio in Montreuil, bitterly cold in the winter and stifling in the summer, became the melting pot of musical collaboration, a place for Amadou and Mariam to explore further and create their warm, dry and rhythmic charged sound. Indian violinist met with Columbian trombonist; the Egyptian ney met the French hurdy-gurdy.

After a short period, a new album was launched called "Tje Ni Mousso" ("Man and Woman") and this is the first recording of the group with whom they currently tour. With this, their international career takes off further and they are invited to a number of festivals and countries including The International Festival of Louisiana in the US, Germany and the Eurokéenes in France.

The next album to be released is "Wati" ("Time") and involved the collaboration of not only their compatriot Cheick Tidiana Seck but also Jean-Phillippe Rykiel and Mathieu Chedid. It was mixed in the famous studios of Peter Gabriel, Real World, in Wiltshire in England.

That same year they featured in concerts in Los Angeles, the Festival de Montreux in Switzerland, the udge festival Rock in Rio in Brazil before finishing with a triumphant tour in Mali.

This compilation collects the more memorable moments and music of this pivotal period for the magic couple. It is the best of three unmissable albums of Amadou & Mariam.