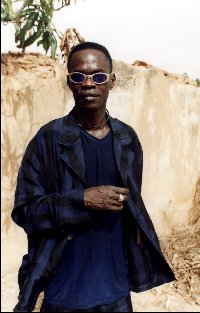 Baaba Maal Baaba comes from humble beginnings . Born in 1954 in a small Senegalese village, Not born into the Griot caste (musicians) he disregarded this and has become a large International World music star. His music came from traditional sounds as well as American R&B and soul, later discovering jazz and blues (James Brown, Otis Redding, Wilson Pickett and Etta James and later Bob Marley and Jimmy Cliff). When he moved to Dakar he joined a 70-piece orchestra and spent a lot of his time with them learning as much as he could about the local musical instruments and how they worked. He later toured West Africa with his guitarist friend Mansour Seck . The duo also spent several years in Paris. Baaba studied at the Conservatoire des Beaux Arts, absorbing everything he could in terms of style of music and types of instruments. Upon returning to Senegal, Baaba formed the group Dande Lenol - literally meaning, "The Voice of the People" - and began creating his highly distinctive sound combining traditional African music with elements of pop and reggae. In 1988 he produced the album Wango, the first in a series of highly acclaimed albums, his next album in 1992 was Lam Toro and then in 1994's Firin' in Fouta. Aside from being a remarkable musician, Baaba is socially conscious and represents the United Nations Development Program as a spokesman on the issue of HIV/Aids in Africa.